Sorry. I know. Rhyming “Alfaro” with “ball far-o” is a small sorrow. But how am I supposed to resist when the facts back up a dumb joke? Since his 2017 debut, Alfaro has hit 4 home runs, and they aren’t wall scrapers – Alfaro’s average home run distance is 423 feet. Among Phillies with at least 4 homers, it’s…well, take a gander. 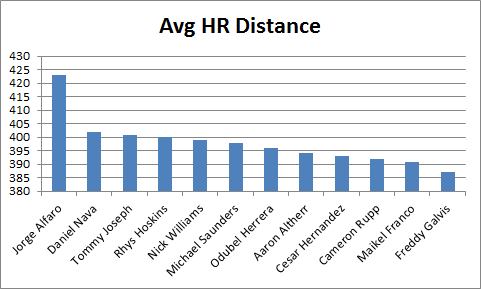 That’s a gap. “So what, the Phillies stink!”, yells someone for the convenience of a segue. You have a point – not just that “the Phillies stink”, but that I’m cutting out 29 other teams. It’s easier for things to look impressive when you divide the sample size by 30. How does Alfaro stack up next to the rest of the league? There are 351 players that have hit 4 homers (or more). Alfaro’s 423 foot average HR distance is good for 2nd place.

“So what!”, yells the same person, “Four homers is a small sample. There’s obviously going to be noise when you’re only averaging four different homers, as each discrete home run will have a much bigger impact on the final result.” To that I say two things – One, you’ve become a much more eloquent over the course of these two paragraphs. Good for you. Two, you once again have a point, but you’re missing the bigger picture. The point isn’t the exact average or where it ranks. If I want to know if a player throws hard and they hit triple digits on the radar gun, a sample size of one suffices. If we can agree that strong people tend to hit the ball far and balls hit far tend to be home runs, then we only need to see the following to know that Alfaro has the potential to be a formidable power threat.

Whether he’s able to harness his strength on a regular basis is another question. His plate discipline numbers haven’t been good – only two walks since his promotion this year, one of which was intentional. As free of a swinger as Nick Williams has been, Alfaro has been worse – Alfaro’s swing rate is 62.4%, the highest in all of baseball. It’s one thing if he’s swinging at pitches in the strike-zone, but Alfaro is offering at nearly half of the pitches he sees outside the zone. Compare that to Rhys Hoskins – Hoskins has swung at 72 pitches out of the zone vs. Alfaro’s 68, and yet Alfaro has only seen 302 pitches vs. Hoskins’s 715.

To make matters worse, Alfaro’s contact rate is an abysmal 64.0%. This can work for some (Miguel Sano, Joey Gallo), but those that make it work are more selective swingers, punishing the ball when they make contact. Alfaro can certainly punish the ball… but unless he learns to be patient, his offensive upside is going to be limited.

Feel free to deliver those nuggets whenever you get a chance. https://t.co/sK24nX5UEC

The top 10 is entirely Rhys Hoskins, Barry Bonds, Mark McGwire, Sammy Sosa, and…Matt Olson. “Who is Matt Olson?”, I thought. This series, Olson would take the opportunity to make sure Phillies fans remembered him, going deep in each contest. Sorry for doubting you, Matt.

Whatever the Yankees did in the top of the 4th this guy was having NONE of it. Hall of Fame thumbs down pic.twitter.com/mrOfOwSkJX