Two things happened when Carlos Santana was signed to a three year deal.

Although #1 has yet to come to fruition, #2 has already proven to be true. The ever-evolving and always excellent MLB Statcast uses batted ball data to determine “catch probability” (how likely it is for a play to be made). While an individual play won’t tell us too much about the quality of the fielding, the on-field talents become clear over a larger sample. Take a look at the full leaderboard if you’re curious, but I’ve highlighted two things of interest. First, the top: 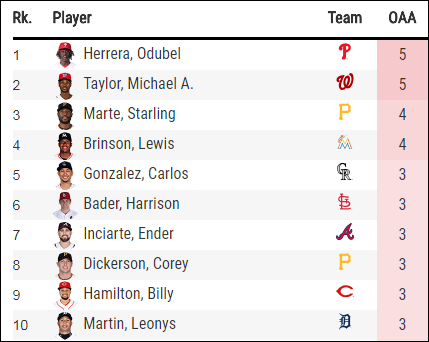 OAA stands for “outs above average”, which answers the question “how much better than average is a fielder?”, to put it simply. Who’s that at the very top of the list? None other than our very own Odubel Herrera. At least by one measure, Herrera is the best outfielder in baseball. Before you get too excited- the opposite end of the list: 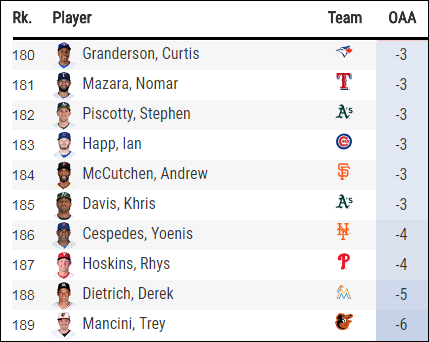 Oh. Uh. Hey there, Rhys. Look, you’re not really an outfielder. We both knew that. That’s fine, though – when you’re one of the best hitters in baseball, your bat offsets the value you lose with the glove.

With one of the best fielders in baseball and one of the worst, the Phillies outfield defense rates out at…average. Exactly average. The Phillies were expected to catch 87% of the fly balls, and they caught 87% of them. Overlay a plot of the plays that Herrera and Hoskins have made, and it’s clear that the defensive limitations of our mashing left fielder are offset by Herrera’s excellent range. 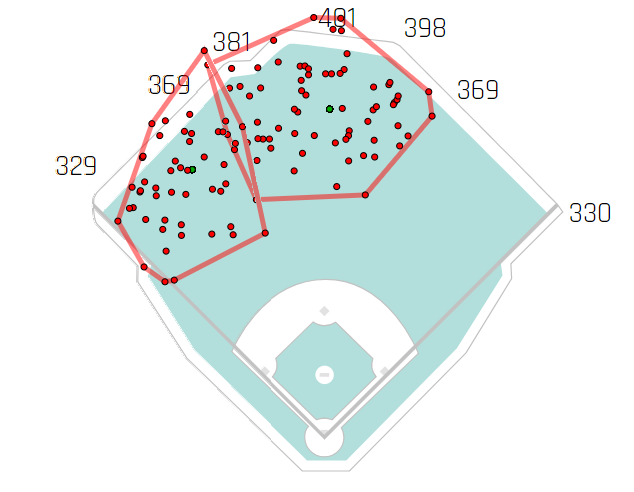 There was some hand-wringing when Santana was signed regarding how Hoskins would fare in the outfield. The short answer seems to be “Not well”. The long answer? “Not well, but it doesn’t really matter thanks to Herrera”.

Standout Hitter: Jorge Alfaro. Alfaro had himself a week, hitting 2 homers en route to a 1.076 OPS. Though this level of success might be fleeting (.545 BABIP), he made some real strides offensively – his contact rate is up, his swinging strike rate is down, and he reduced his strikeout rate by almost 10 percentage points (!!!!). He’s still swinging too much and striking out too frequently, but hey – just a week ago he looked absolutely lost at the plate. Baby steps.

Standout Pitcher: Aaron Nola. Lemme hit you with some numbers.
2 starts.
14.1 innings pitched.
11 strikeouts.
2 walks.
1.88 ERA.
What’s that spell? ACE. Nola is 19th in baseball by WARP, 9th by fWAR, and 2nd in rWAR. Any way you slice it up, he’s among the best pitchers in the game right now. Enjoy it – what he’s doing is special.

Sit-Down Hitter: Carlos Santana. Coming into the season, Santana’s offensive output projected to be the opposite of rough – not rough. (Were you expecting me to say something else?) To this point, however, the BABIP gods have spat upon him – Santana’s .163 BABIP is by far the worst in baseball. Santana is still taking his walks, but those can only carry him so far. His xBA is 100 points higher than his current BA, so this isn’t a case of making poor contact – the ball is just finding the fielders instead of open space. As a switch hitter, he’s taking the majority of his PA as a lefty (97 PA vs. 35 PA as a righty). Here’s a spray chart of his outs as a lefty, courtesy of Statcast. 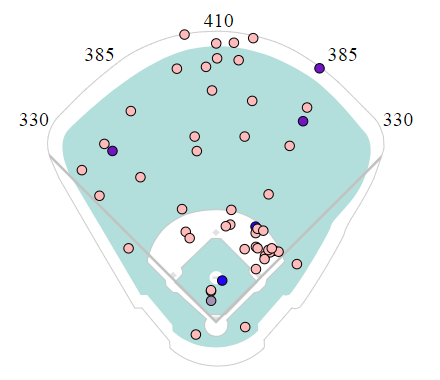 Sure, he’s pulling his grounders, but he’s spraying the ball everywhere to the outfield. It hasn’t been pretty so far, but there isn’t much of a reason to believe his ineptitude will continue for the entire season.

Sit-Down Pitcher: Ben Lively. There have been 898 games so far in 2018. Ben Lively’s 2.1 inning, 7 ER start on April 26th ranks as the 13th worst. Bill James, father of Sabermetrics, came up with the concept of “Game Score” in order to quantify how a particular start went. 50 is average. Lively’s start clocked in at 12. After his disastrous outing, Lively was placed on the 10-Day DL with a lower back strain. At least there’s an explanation as to why it went so poorly.

The coach told this kid to run home as fast as he can and this is what he did 😂 pic.twitter.com/3jX817BIkc