I could write about the recent struggles of Rhys Hoskins. The man who looked unstoppable to begin the season has come down to earth quite a bit, and there’s a lot that I could unpack there. But I won’t. Because as much as Hoskins carried the team to begin the season, the team hasn’t missed a beat as his presence in the lineup all but disappeared. You’d think a team’s best hitter going through a prolonged slump would seriously hurt that team’s record, but….it hasn’t.

To further the point (which hopefully you’ve gotten by now) – 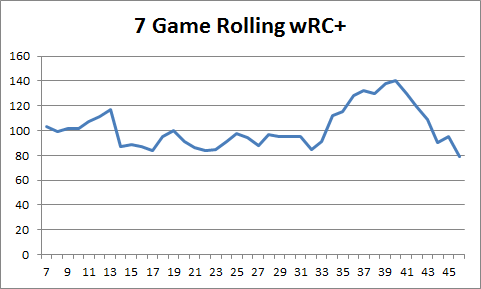 But it’s the best mark in baseball.

As Hoskins dropped off, Santana and others picked up the slack. Even at their worst, the bats have never been truly awful. The Phillies have had the most consistent offense in baseball, and when Rhys starts to heat up again, they will become the team to beat.

Standout Hitter: Carlos Santana. The slow starter had himself a great-but-not-flashy week – 24.1% walk rate, 10.3% K-rate, with a homer and five singles. Often when I write about the “best hitter of the week”, it ends up being the player who has the week’s best BABIP – a week isn’t a particularly large sample, so it’d be easy for a few extra hits to tilt the scales in a player’s favor. This isn’t the case with Santana – a .278 BABIP is in line with his career average. He was just hard to get out thanks to his excellent plate discipline.

Standout Pitcher: Seranthony Dominguez. The young reliever has quickly become one of the more trusted arms in the bullpen, and with good reason. Over the past week he pitched 5 innings in 4 games and allowed 0 runs, 0 walks, and only 1 hit to the 16 batters he faced. With Pat Neshek still on the shelf and Tommy Hunter struggling, it’s good to have a player come up that can reliably get outs.

Sit-Down Hitter: Rhys Hoskins. Hoskins’s struggles stretch beyond the past week, but recently have hit a new low (or should I say “not hit”?). Part of this is his BABIP. Part of it is, well, he seems to be feeling the pressure. Take note of how much yellow/red there is outside the zone in May.

To say Rhys Hoskins has expanded his strike zone this month would be an understatement pic.twitter.com/ppyLdLXCRJ

His struggles won’t last forever, he’s too talented for that. We just need to wait this out.

Sit-Down Pitcher: Drew Hutchison. Hutchison appeared in only one game over the past week and it was a disaster. He faced 17 batters over 3 innings and allowed 9 of them to reach (Yes, that’s more than half. Yes, that’s bad). An ERA of 15.00 with peripherals that support that level of terrible-ness made Hutchison an easy pick for this dubious honor. (Side note: Hutchison hasn’t appeared in a game since. He’s still on the active roster so I assume that’s performance and not injury related.)

Appalachian State’s Travis Holden robbed of an inside-the-park homer by a questionable call at the plate. pic.twitter.com/TofC2MVzEy