Just a couple of weeks ago, I wrote that the Phillies offense hadn’t slumped thanks to a rotating cast of contributors. Since then, the offense has entered total free fall mode. Time makes fools of us all…just not usually so quickly (While I’m at it, other things that haven’t happened yet – Aaron Nola perfect game, Mike Trout coming to the Phillies, Squeezits and P.B. Crisps making a triumphant comeback. Come on time, don’t let me down). Around the web, the cause of slump was quickly diagnosed – the once patient Phillies were no longer taking pitches and working walks. They weren’t wrong – but that’s not all that’s plaguing the Phils.

Through May 17th, the Phillies offense was competent. Bordering on good, even. Combine this with their excellent pitching, and they’d found a recipe for success. Since May 18th, however….

Besides a decent walk rate, everything else has been abysmal. Not only have they been in the bottom 5 for most of the major stats – in many of those stats, they’ve ranked 30th. You know, out of the 30 major league teams. Last in baseball. As the Beatles would say, “can’t get no worse”.

Besides the lack of patience, the biggest issue has been the team’s quality of contact. If a player is making good contact, good results tend to follow. This is why you hear the emphasis on launch angle and exit velocity on broadcasts (oftentimes tongue in cheek from those who scoff at the word “analytics”). The ideal launch angle isn’t too high or too low – too high, and the hitter will pop it up; too low, and it’s an easy grounder. The Phillies launch angle chart before and after May 18th is night and day.

First, draw your attention to the middle of the graphic – the Phillies used to really square the ball up, resulting in pretty optimal contact – few pop ups or easy grounders. Where there was once that peak, there is now a valley – a valley of poor contact. Take a look at the graphic again, but now focus on the edges. Recently, the Phillies have either been killing worms or popping the ball up, and none of those batted balls have resulted in a hit. The Phillies good contact rate (the best kind of contact – Good Contact™) has shrunk from 14.0% to 10.7%.

The simultaneous regression of patience and contact quality has sent this offense into a tailspin. The pitching has kept the team from completely falling apart, but with a 7-10 record since May 18th, it’s not just hard to see how this team will compete with this kind of offense – it’s impossible.

Standout Hitter: Jake Arrieta. Arrieta was chosen for two reasons. One, he had 2 plate appearances and homered in 1 of them. Two, no position player had an above average week. I’m not about to award someone for being the best of the rest, so Arrieta, congrats on being the first (and probably only) player to be named both Standout Hitter and Standout Pitcher this year.

Standout Pitcher: Vince Velasquez. This is the Velasquez I believed in. Put aside his disastrous March 31st start and Vinny V has a 3.39 ERA with peripherals to match. His K-BB% ranks 16th out of 112 pitchers since April 1st. On Saturday he continued the trend  of “good pitching” with 9 K’s and only 1 walk over 6.1 innings. He only allowed 1 run, which was 1 more run than the Phillies scored, saddling him with the hard luck loss.

Sit-Down Hitter: Scott Kingery. With J.P. Crawford on the DL, Kingery was thrust into a starting role, and it didn’t go particularly well. Kingery has one extra base hit in his last 9 games (and 0 over the past week). His wRC+ over the past week can be counted on one hand. It hasn’t been pretty and I don’t know if there’s a “quick fix” for him.

Sit-Down Pitcher: Adam Morgan. He pitched in two games, faced five batters, and retired as many batters (1) as he gave up grand slams (also, 1). His ERA was 81, roughly 100 times higher than Seranthony Dominguez’s. It was not a good week. 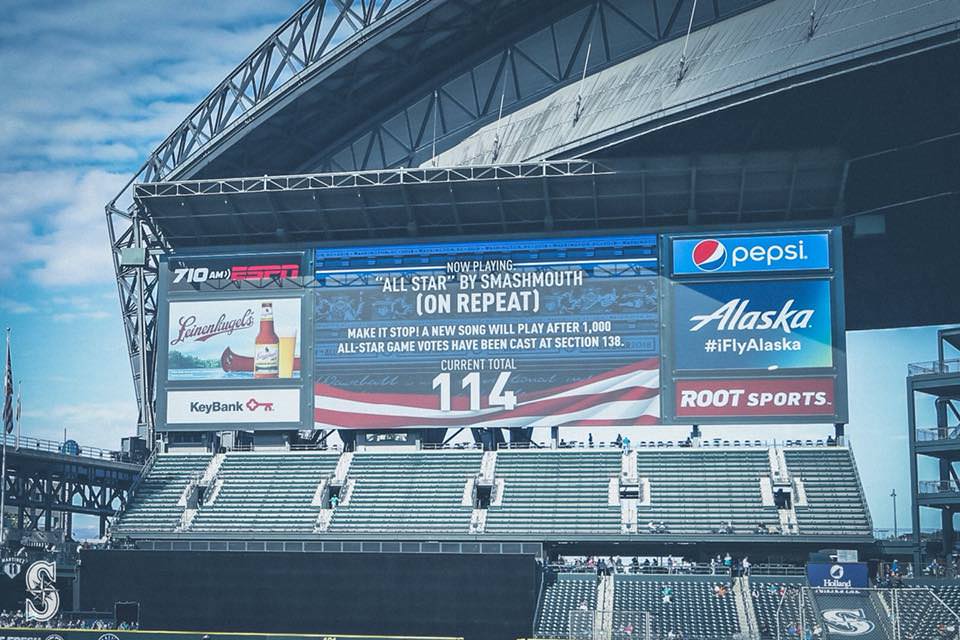 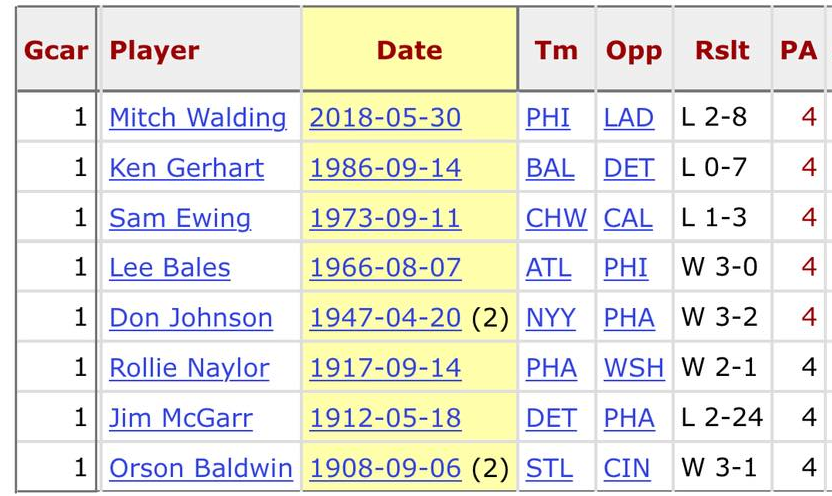 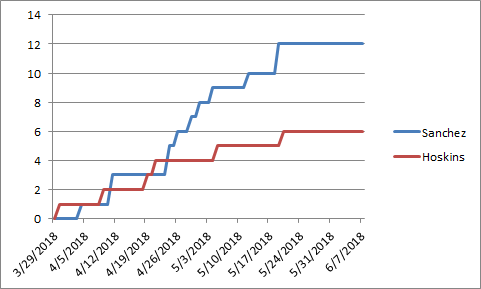