The Phillies opened 2019 with a bang – their sweep of the Braves left them as the only undefeated team left in baseball (and the Braves as the only winless team left). They went on to split the series with the Nationals (and they’d still be undefeated if it weren’t for an error and a meltdown…more on that later). The secret sauce to their success? A historic level of mashing.

This team is smooshing. Clobbering. Whatever other word you’d like to use to heap praise upon the team’s power output. After hearing a discussion on the always excellent podcast Effectively Wild, a friend and I talked about our favorite power stats. I wanted to delve into a few of these stats, and explain WHY I like them, and show how the Phillies stack up.

– Home Runs. A home run is the most ideal outcome for a PA, so it makes sense to start here when figuring out how potent an offense is. The Phillies rank 8th with 10 home runs on the season.

– AB/HR. Just looking at the number of home runs can be misleading. After all, the Phillies rank 8th in home runs hit – but they did so with the 6th FEWEST at bats. AB/HR simply puts home runs on a rate basis, so you can see how regularly players go yard. League average AB/HR was 29.6 in 2018. The Phillies rank 3rd with 16.7 AB/HR.

– SLG. SLG, or slugging percentage, is basically a weighted batting average. Singles are worth 1, doubles are worth 2, triples are worth 3, and home runs are worth 4. It’s a little simplistic, but it gets the job done. League average SLG was .409 in 2018. The Phillies rank 2nd with a 0.527 SLG.

– ISO. ISO stands for “isolated slugging”. It takes SLG and subtracts batting average. What does that accomplish? It removes the value of singles and leaves you with just the value a batter gets from extra bases. For example, by slugging percentage Jose Altuve was an above average power hitter in 2018, with a .451 SLG. This is a bit misleading, as his SLG is propped up by 127 singles (not exactly a “power” outcome). Looking instead at his ISO, we see his power is actually below average at .135. League average ISO was .161 in 2018. The Phillies rank 2nd with a .257 ISO.

– Barrel Rate. Every stat we’ve dealt with so far looks at results – home runs, doubles, triples, etc. – but once again, this might not be the whole picture. A hard hit line drive that’s caught for an out isn’t less powerful than a dribbler down the line for a double – it’s just less lucky. To isolate quality of contact from results from said contact, we can look at barrel rates. Barrels are defined here, but as I’ve said before, it boils down to “hit ball good, ball does good things (usually)”. Barrel rate is simply the percentage of your batted balls that are barrels (Barrels / Batted Balls). League average in 2018 was 6.7%. Philadelphia ranks 1st in all of baseball with a 14.8% barrel rate. The Yankees are a distant 2nd with a 10.1% barrel rate.

I know that’s a lot of information! But I hope that it helped both educate and illustrate that the Phillies are absolutely tearing the cover off the ball so far this year. Barreldelphia, indeed.

Standout Hitter: Bryce Harper. 3 absolute bombs put an exclamation point on what has been an incredibly hot start to his Phillies career. His batting average, OBP, SLG, OPS, and wOBA lead all of baseball right now. Harper had his detractors all offseason. He’s already proving them wrong.

Standout Pitcher: Zach Eflin. When it was announced that Tuesday’s match-up with the Nationals would pit Eflin vs. Scherzer, I have to admit I was a little disappointed. I wanted to see Ace vs. Ace, and Eflin (solid as he is) is not our ace (NOOOOOLAAAAA). So what did Eflin do? Give me the ace-level performance I was hoping to see.

Sit-Down Hitter: Cesar Hernandez. Hernandez wasn’t even bad – his .721 OPS was middling, but not downright bad. Add in his defense, and it was still a good week. It’s just that the rest of the offense was incredible.

Sit-Down Pitcher: David Robertson. This (dis)honor could have easily gone to Aaron Nola as well. Nola had two starts this week. On opening day, he was very solid (albeit wild, with 5 BB’s to go with his 8 K’s). His second game…was kind of a disaster. 3 innings pitched, 3 home runs, 6 ER, and only 2 strikeouts. The Phillies potent offense bailed him out.

David Robertson was worse. He’s pitched in 3 games, none of them scoreless outings. His complete and total meltdown directly led to the Phillies first loss of the season – with the game tied and the Nationals up to bat in the 9th, Robertson’s sequence went as follows – Single, Walk, Walk, Walk. He absolutely could not find the strike zone, as evidenced below. 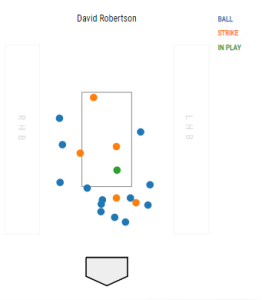 The Phillies paid for Robertson because he has a long track record of success. I just hope he has a lot of track left ahead of him.