Where did our Ace go? Fresh off a third place Cy Young finish, there was no reason to believe Aaron Nola would take any steps back. The first start of the season was more of the excellence that we’d become accustomed to. Since? Anything but that. The strikeouts have been there (20 Ks in 19 innings), but so have the runs (18 earned). Take out that strong opening day and Nola is sporting an 8.53 ERA. That’s not great! What’s the matter? Can we fix him?

A quick glimpse at his career monthly splits should reveal whether Nola traditionally starts slow. And a cursory glance would indeed make it look like March/April are among Nola’s worst months.

But…that includes this year. We already know THIS April has been rough. What about previous Aprils?

Nola had a 3.30 ERA in March and April coming into this season, almost perfectly in line with his career ERA of 3.35 entering the year. If you were hoping this was (sort of) typical for Nola, I’m sorry to say this isn’t the case.

Nothing too surprising here. His velocity is still good, his pitch mix is about the same it was before, he’s underperforming his xBA by a bit and…wait a minute. 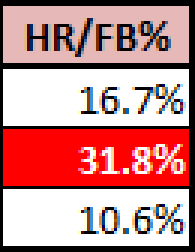 Oooookay. This is and isn’t good. The “is good” – this is way to high to continue. As this regresses to the mean, his numbers will improve significantly. The “isn’t good” is that this is the second highest his HR/FB% has ever been. The highest was 32.1% – in September 2018. Nola’s picking up where he left off in 2018 – just not where he wanted to be.

What’s Nola doing wrong? That’s harder to put a finger on. His pitch mix, location, swing and miss rate, velocity, and spin rate all seem in line with his 2018 numbers. Perhaps the difference, then, is his release point. 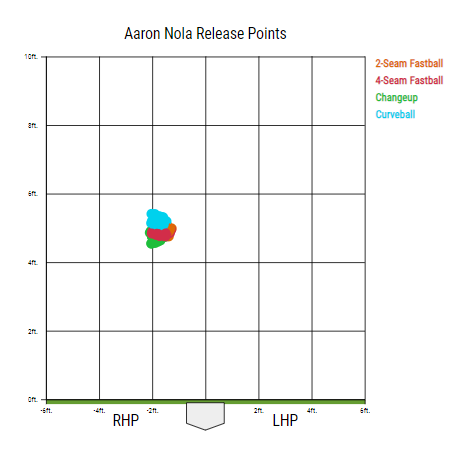 It’s hard to tell, but it looks like there’s slightly more separation between his release points by pitch this year (hence the sort of ice cream scoop-like stack). Last year, his release points were a little more grouped together (see here), which might’ve made it harder for hitters to pick up what he was throwing. It’s also worth noting that his release points this year are pretty much all at or to the right of -2 feet, whereas last year his release points leaked over a bit. Is this anything? Maybe not – it’s a pretty small difference, and he hasn’t thrown nearly as many pitches this year as he has last year, which could really be the difference in the visualizations. Then again, this is professional sports – even a small difference in process could lead to a huge difference in results. Whether it’s this or not, Nola better piece together what’s going wrong, and soon – in a tight NL East, every win matters.

Standout Hitter: Scott Kingery. Scott had a great week – he had as many Kingery Dingerys as he did strikeouts (2). On top of that, he piled up 4 more extra-base hits – all doubles. In total, he recorded a 1.673 OPS, which led ALL OF BASEBALL for the week. Kingery never had a better 5-Game span in 2018. Sure, the BABIP is high, which will regress – but his ISO is up and his strikeouts are down. Nice to see from a young hitter touted for his potential.

Standout Pitcher: Victor Arano. An abysmal spring training had Arano on the outside  of the bullpen looking in. He was called up due to other injuries, but didn’t disappoint – in 4 innings of work, he struck out 7 batters (including 6 straight in the 12th and 13th innings of a 3-1 extra innings win over the Marlins) and allowed 0 runs.

Sit-Down Hitter: Odubel Herrera. Not a good week by any measure! Do you like batting average? 0.182. Do you like OPS? 0.445. Do you like wRC+? 16. Luckily for us, Herrera doesn’t need to do any heavy lifting in this line up, so we can afford him having cooler stretches – even if those cool stretches are as cold as ice.