On April 8th, the Phillies were 7-2. Their playoff odds peaked at 62.2%, the highest their odds have been in April going back to 2014. The pitching? Adequate. The offense? Rolling. The team, in short, looked unstoppable.

Plot twist- they were stoppable. Since their hot start, the Phillies have recorded a not-so-nice 6-9 record. The offense, which put up 6.33 runs/game in the first stretch of 9 games, has been held to 4.19 runs/game and scored 1 or fewer runs five times. The pitching has also regressed, although to a lesser degree. The Phillies playoff odds mirror the runs/game – 41.9%. This similarity is at once pleasing and not pleasing, as I enjoy the coincidence but dislike that it’s under 50%.

The discourse has turned overwhelmingly negative. “I want the head of Kapler!” is not something I’ve HEARD, per se, but I’m pretty sure that’s the basic gist. With the team’s play of late, it’s easy to lose sight of where we really are. As it stands, the team is 13-11. That’s an 88-win pace over a full season. (…technically 87.75, but that’s close enough to round. Round numbers are better). I know I’d be happy with an 88-win season, so long as that record carries with it a postseason berth.

Still not convinced? Good, because I’m. not. done. convincing yet. From 1962 (the year that the 162-game schedule was finally adopted by both NL and AL) to 2018, 176 teams have won 13 of their first 24 games. I’ve plotted their final winning percentage below. 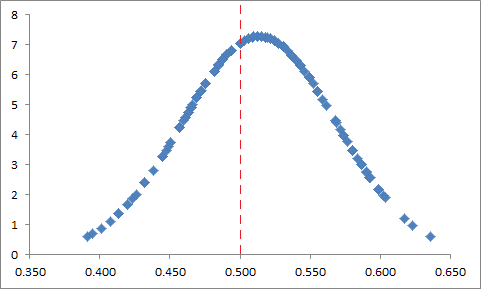 Feel better yet? …Maybe not, 83.5 wins isn’t enough to get to the postseason. That happens to be what FanGraphs has them projected to finish, too – 84 wins. An improvement, but still short of greatness. If you need something, a positive note to leave on, let me just put this here – the 2008 team also started 13-11. We both know how they finished.

Standout Hitter: Rhys Hoskins. He struck out a little more than I’d like, but everything else looked great for this slugger. His most recent homer will be one of the enduring images of the 2019 Phillies. Let’s roll that tape again.

Lovely night for a stroll …

Standout Pitcher: Vince Velasquez. 6.00, 4.76, 4.50, 4.50. Those are the ERAs of the other starters for the past week. Velasquez, on the other hand – 1.69. That lowers his season ERA to 1.99! He’s only averaging around 5.1 innings per start, but they’ve been solid starts nonetheless – by game score, he hasn’t had a single “below average” start. Not bad for someone who was supposed to be your fringe 5th starter.

Sit-Down Hitters: Aaron Altherr and Nick Williams. The two halves of the outfield platoon performed identically awful. The both had 7 plate appearances. The both had 1 walk. They both OPS’d 0.143. When Herrera returns, the Phillies are going to have a difficult decision about who to send to the minors – but not for the reason that you’d want.

Sit-Down Pitcher: Drew Anderson. Drew Anderson’s name was hot this spring – he looked sharp and there was a lot of talk about how his cutter revamped his entire repertoire. This past week, none of that repertoire got it done – he rarely went to his offspeed pitches (only 4 out of his 84 thrown were categorized as offspeed), and his fastball and breaking ball pitches got tee’d up (0.451 wOBA, 0.440 wOBA respectively). The results were ugly – an 11.25 ERA and a 7.36 FIP. It was only 4 innings, but they were 4 bad innings.

Ball dude went on a journey for this ball 😂 pic.twitter.com/AuLkOZsqUh

We gotta hand it to Freddy: This was spectacular!

Jeff McNeil nails the runner on a CLOSE play at the plate. pic.twitter.com/QV1jpx5hsm