The Phillies entered the season with high hopes thanks to a productive off season. The additions of Harper, Realmuto, McCutchen, and Segura had fans dreaming of the postseason for the first time in years. It’s been a bit of an uneven ride, but the “unofficial” first half is now in the books, and they have a 47-43 record to show for it – good enough for a wild card spot. As nice as that is, the first half also exposed some weaknesses around the roster. It’s become apparent that in order for these Phillies to play October baseball, they’ll need to make some moves. Let’s see if we can identify a few realistic targets (No, we will not be mentioning Mike Trout. Except to say that we won’t be talking about him).

We can probably safely eliminate the Mets from this list – after all, take a look at the trade history between the two teams. Only four trades this millenium.

Okay, so we have our list of sellers. Now to get a list of trade-able players. In order for a player to be a trade candidate, he has to:

Given the Phillies weaknesses, we will look at both hitters and pitchers. This week, however, we’ll stick with hitters. On the position player side, there are 111 players that have at least 100 PA from our list of sellers. Some of these are obvious no-go’s – we’re not trading for Miguel Cabrera (bad contract) or Vlad Guerrero Jr. (Likely untouchable). Let’s prune this list down to the most acquirable players – rentals.

When a team is going nowhere, there’s little reason to hold onto a player who will be a free agent at year’s end. Teams know they can’t go from bad to good overnight, so any player who’s unlikely to be around during their next contention window is trade bait.  Using MLB Trade Rumors list of free agents (see 2019-20 Free Agents, 2020-21 Free Agents), I’ve removed every hitter that isn’t a free agent in the near future. 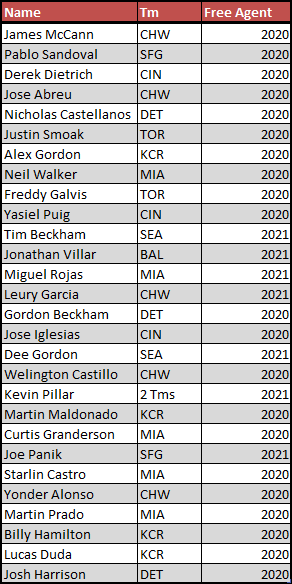 28! That’s not a lot to work with. And the pickings will just grow slimmer from here as we continue to find our targets.

Now, to identify our needs. Offensively, the Phillies haven’t been awful – 14th in runs scored, 15th in OBP, 19th in OPS – but the lineup has holes. Andrew McCutchen was one of the stronger hitters in the lineup before going down for the year, and while Kingery has stepped in admirably, outfield depth remains an issue. Looking around the diamond, I think it’s fair to say the Phillies could use infield help as well – Franco has been more cold than hot, and there’s not a lot of talent backing up Hoskins/Hernandez/Segura.

That’s a wide net to cast, but can still help us remove some names from our list. Anyone who’s primarily a 1B, DH, or Catcher should be removed. That widdles our list down to 21. 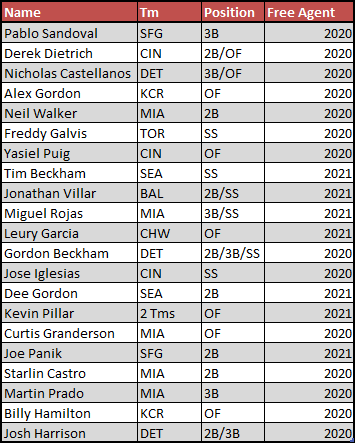 So we have our list of potential fits, but there’s still one more filter to go through – who’s actually good? This is a bit of a complicated question. If you’re wondering why I don’t just sort by OPS, let me remind you about Asdrubal Cabrera. When the Phillies traded for Cabrera last year, he had an .817 OPS – quite solidly above average, but this OPS was fueled by an unsustainably high 16.2 HR/FB% (His career average was 9.7%). Post-trade, that HR/FB% dropped to 9.3%, and his OPS tanked to .678. Past performance doesn’t always equal future success.

So rather than “Who has been good”, what we’re looking for is “who’s likely to BE good?”. To give a general overview, I looked at BABIP, HR/FB%, Barrel Rate, and BA – xBA to figure out who’s overachieving, who’s underachieving, and who’s resultRoms matches their underlying stats. What I hoped to end up with is a list of players who can contribute to the team – either with their bat, their speed, or their defense.

After sorting through the stats and removing the pretenders and offenders, I was left with 8 possible trade targets. 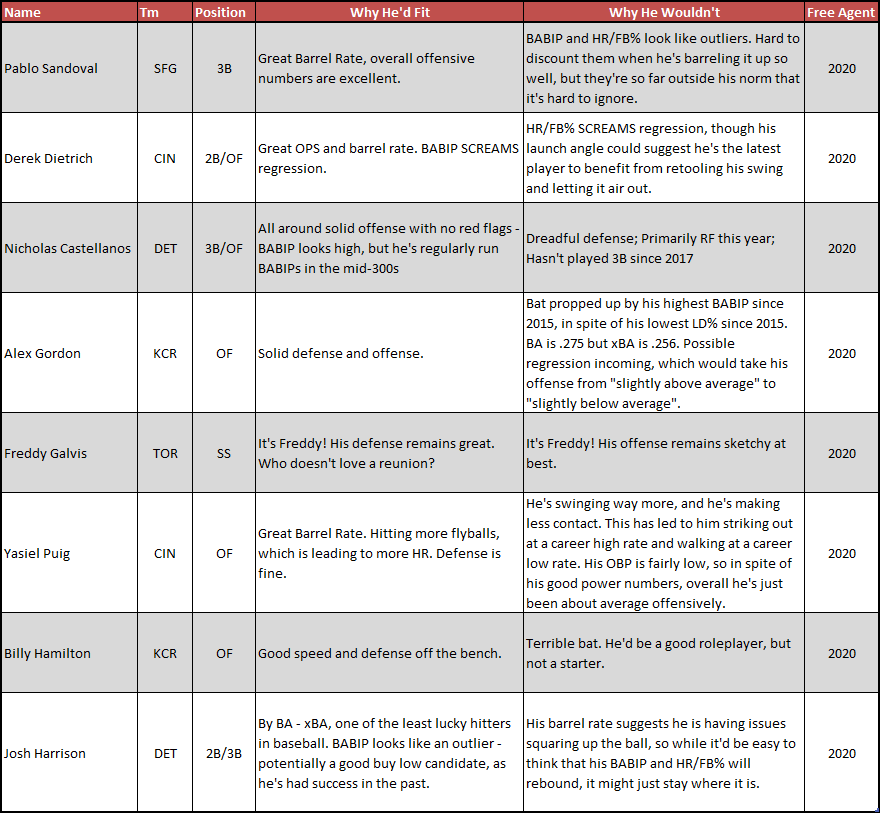 Look out, Roman Quinn and Sean Rodriguez. Any of the players above here could be replacing your non-production. Obviously, there are caveats with each of them, and with players like Harrison or Hamilton the price better be “cheap as free” in order to justify taking a risk on the bounce-back. But Sandoval, Dietrich, Castellanos, or Puig would be upgrades over what we have. If the Phillies end up in a position to buy at the deadline, I hope they end up with one of these players – both to better the team and to make me look smart.